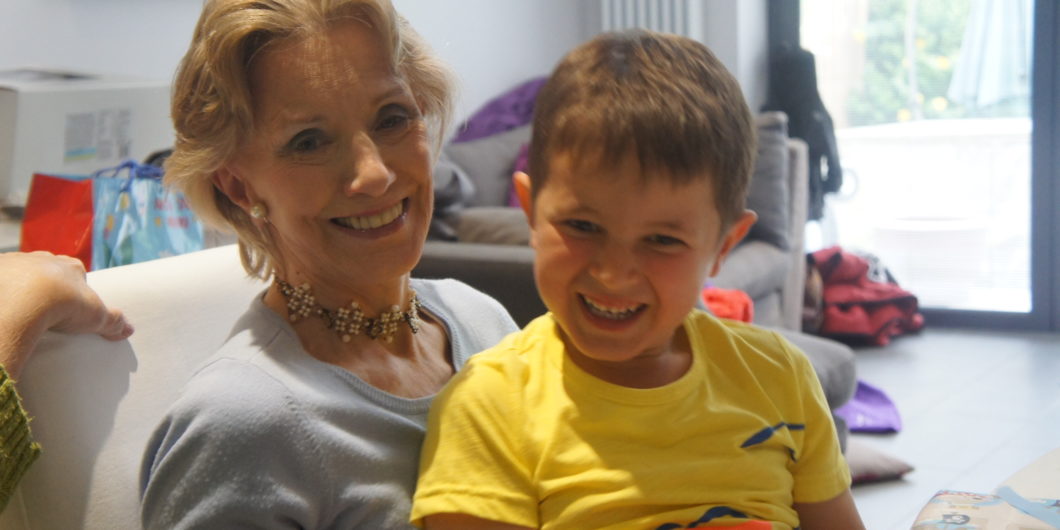 When I caught up with Rosalind, she was rushing off to a lecture on how the universe began!

Fortunately, I had just enough time to get an insight into how this ex-teacher, writer, and grandmother stays active and keeps her arthritis at bay. Rosalind is a Scottish Country Dancing enthusiast who lives in London with two cats, without a TV, and near her four grandchildren.

“I had been very sceptical about it, which makes me laugh when I think back.”

18 years ago, Rosalind’s friend Celia suggested she join her for an evening of Scottish Country Dancing. The invitation came at just the right time.

“I had a big change in my life, moving house and changing my circumstances. I suppose I was re-orientating myself.”

She wasn’t actively looking for new hobbies. However, her willingness to take up the invitation opened up a whole new world for her.

“I said, ‘That sounds a bit old-fashioned’, but I fell in love with it immediately, so that was one very lucky thing. Now I say to Celia – ‘You changed my life!’ “

Rosalind has since enjoyed dancing with various groups and made numerous friends. Her dedication to learning this new skill has paid off as she now teaches occasionally and has even had a dance written for her!

“You are dancing continuously, but not dancing vigorously all the time.”

If you have ever tried Scottish Country Dancing, you will know how energetic and vigorous it can be. It requires a high degree of muscle power and control. You dance in pairs and take turns to perform the most dynamic elements of the dance.

It also exercises your brain! Rosalind particularly enjoys the mental challenge of learning the numerous, and often complicated, dances.

“You have to work hard if you want to improve. In the beginning, you know you have to concentrate, and then your brain starts getting used to it, and then things start becoming easier.”

The social aspect and feeling of being supported by the group are not to be under-estimated.

“One thing with the dancing, when you get there, you immediately feel welcomed, and you think ‘Thank goodness I came out!’”

A personal fitness trainer visits Rosalind at her home twice a week. For one of these sessions, a friend joins her. In both sessions, she performs a mixture of cardiovascular training, strength, balance, and core fitness exercises.

She feels confident knowing that her trainer is qualified and experienced. The fact of having a ‘leader’ and structure to the session is important for her. The enthusiasm and personality of the trainer set the tone.

“They run the show, but also fill it with their mood and spirit.”

Sharing one session with a friend enables her to share the cost. Rosalind also enjoys the small group dynamic and social interaction:

“There are things like smiles and the occasional joke that you get, which just make it light-hearted.”

Every couple of weeks, Rosalind enjoys a long walk with a friend. They walk for 3-6 miles and usually stop for coffee along the way or a replenishing lunch at the end. The company is a crucial ingredient – even though she feels great afterwards, Rosalind admits she wouldn’t consider going for such a long walk by herself:

“I would like to do more walks, but it’s more fun to do it with somebody.”

They use a book which lists walks in and around London, and they are enjoying discovering new areas. Each time they head off they learn about the local area and discuss points of geographic or historical significance along the way.

This combination of dancing, long walks and exercise sessions has resulted in a multitude of benefits for Rosalind.

“I don’t know where my arthritis has gone!”

About three years ago, when Rosalind started getting a feeling of discomfort in her hip, her doctor diagnosed arthritis.

For many people, a diagnosis of arthritis would be cause for slowing down (and feeling down). However, Rosalind took her doctor’s advice to keep as active as possible. She says that her hip has been getting better and believes this is a result of the regular exercise sessions and long walks.

“It has clearly helped it. For example, I did a very long walk with a friend, it was six miles or more, and at the end, I thought – I’m going to pay for this tomorrow. But it didn’t; it felt fine.”

Many research studies have shown the benefits of mild to moderate exercise for people with arthritis. Keeping active is one of the best things you can do to keep your joints healthy and reduce pain from arthritis.

Keeping up with four energetic grandchildren is no small feat

As well as reduced discomfort in her hip, Rosalind has noticed that she now moves much more easily. This increased suppleness makes her feel much happier in herself.

“Everything feels quite well-oiled and easy. Your body feels as happy as well as your brain, let’s say.”

This ‘body happiness’ means that Rosalind is agile enough to keep up with her grandchildren (aged between 3 and 9). She can quickly hop onto the floor to build a train track or climb into a bunk bed to read a bedtime story.

“I would recommend it for the mental wellbeing, the sort of elevated mood that it gives you.”

Rosalind talks animatedly about the ‘higher mental happiness’ she feels as a result of her exercise sessions and regular dancing.

“You get a burst of it immediately after a session. But then the general sense of wellbeing prevails.”

When we exercise, our body releases ‘feel-good’ neurochemicals called endorphins. Endorphins are known to improve mood and act as natural painkillers (they have the same impact on the brain as morphine and codeine). Research has shown that people who exercise regularly experience significantly less depression and anxiety. Exercise also improves your sleep quality – and we all know how much brighter the world seems after a good night’s sleep.

Rosalind’s top tips for staying fit and active for longer

Before I let Rosalind go to her lecture about the beginning of the universe, I asked her what advice she would give to our readers here at Vida Wellness:

Don’t let your preconceptions get in the way. Rosalind’s willingness to take up a chance invitation opened up a whole new world for her.

“Anything a friend suggests, do it.”

Initially, spending money on classes, a trainer, gym membership or equipment might seem excessive. But once you start feeling the benefits (improved mood, better movement, reduced pain, more energy), it will soon become a no-brainer.

“If you’ve got money to spend, spend it on exercise.”

Everything Rosalind does to stay active involves other people; the dancing community, her fitness trainer and the friend who joins her for walks). She believes this is crucial to her success in keeping these activities going.

“You just get nourishment from other people being there with you.”

I would love to know what you most enjoyed about Rosalind’s story. Leave a comment below or send a message on our contact page to let me know which of Rosalind’s tips is most relevant to you and what you could do today to become more active.

Please log in again. The login page will open in a new tab. After logging in you can close it and return to this page.